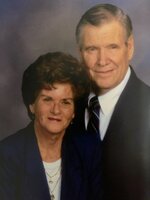 It is with deep sorrow and much love that we mourn the passing of David (Dave) W. Horn, Sr., 89, and Martha E. Horn, 84, of Rockledge, FL. Husband and wife and best friends for over 64 years, both passed away unexpectedly on Wednesday, June 15, 2022. Dave and Martha will be lovingly remembered by their children: David W. Horn, Jr. (former wife Paula Lipari), and Carol S. Stansfield (Tom); grandchildren: David W. Horn, III (Katie), Michael T. Horn, Jennifer L. Gerdes (Frantz), and Thomas W. Stansfield, Jr.; great grandchildren: Ethan M. Horn, and Jayden K. Gerdes; as well as numerous extended family members and friends. Dave was predeceased by his parents Lester S. and Marjorie M. Horn, and brothers Lester K. Horn, and Robert L. Horn. Martha is survived by her siblings: Doris (Dolly) T. Gilbertson, Maura J. Doyle, Helen (Irish) D. Browning, and Robert J. O’Donnell; Aunt Marie Ward; and many nieces and nephews. Martha was predeceased by her parents Albert J. and Doris A. O’Donnell; siblings: Eileen O’Donnell, Patricia L. Peery, Kathleen (Kay) F. Barbas, James (Jimmy) D. O'Donnell, Richard O'Donnell, Albert (Al) J. O'Donnell, and Roberta (Bobbe) D. Landau. Dave was born on May 27, 1933 in Columbus, OH. When he was young, his family moved to Miami, FL. He graduated from Miami Edison High School in 1951. Dave enlisted with the United States Army in March 1954. While enlisted, he studied at the University of Florida. He met Martha while stationed in Reading, MA, and they were married Nov 1957 in Woburn, MA. Upon completion of his honorable service to his country, Dave worked for McDonnell Douglas from May 1957 to May 1988 (31 years) as an Electrical Technician working on the Delta program. Martha was born on Feb 22, 1938 in Woburn, MA. She was one of twelve children. Martha graduated from Woburn High School in 1955. She worked in the Woburn office of the Beneficial Finance Co. before being transferred to Melbourne, FL. After the birth of her first child, she was a stay at home mom until the children were in school. Martha was best known as a substitute teacher, working at St. Mary’s Catholic School, Kennedy Middle School, Rockledge High School, and Clearlake Middle School. She was strict but loving at the same time. Two weeks before they married, Dave rented an apartment in Merritt Island, FL. In 1958, they rented a house in Melbourne, FL, then bought a house in Titusville, FL. Their first child, David W. Horn Jr. was born in Jan 1959. Their second child, Carol S. Horn, was born in Apr 1961. In 1962, they bought their forever home in Rockledge, FL. Dave and Martha, by themselves, built a lakefront “A frame” cabin in Ocala, FL. Many family and friends visited the cabin and enjoyed bass fishing, swimming, water skiing, and crab boils. They were even visited by wildlife on their back porch. Dave and Martha sold the cabin to buy their first sailboat. They had several smaller sailboats before they getting a 29’ Columbia named “Amity”. In 1975, they purchased a 32’ Wright Allied Seawind named “Odyssey”. They primarily sailed on the Indian River, in Brevard County, FL, for pleasure, but they often participated in local races. They sailed to St. Augustine, Lake Okeechobee, Florida Keys, and many six-week vacations to the Abaco’s in the Bahamas with their children, and some with their grandchildren. They had many good memories and met many wonderful people sailing. During the 2004 hurricanes, “Odyssey” drug anchor and drifted into a dock in the Indian River. Losing “Odyssey” was like losing a family member. They went on several cruises (one to Alaska with three of their grandchildren), vacationed at Niagara Falls, Ireland, and Rome, Italy. They were very involved with their grandchildren, taking them sailing, picking them up from school, making sure their homework was done, and watching them over summer break. Both Dave and Martha were active at St. Mary’s Catholic Church/School. After Martha retired from substitute teaching, she volunteered at St. Mary’s Catholic School helping in the lunchroom. Dave was involved with “Christ Renews” ministry. Dave and Martha decorated their house at Christmas time for over 20 years, to include over 4,000 lights, sleigh and reindeer on rooftop, Santa & Mrs. Claus, elves, soldiers, snowman, deer’s, and a nativity scene. Dave also had Christmas music playing outside. People from all over the county would come to view the extraordinary decorations. Viewers would be greeted by Martha and their pet Shelties “Danny Boy” or “Duke” dressed up with antlers. Martha, and sometimes her grandchildren, would give out candy canes to those who drove by. They converted their back porch into a room they named “Dave’s Conch Out”. The room was decorated with tropical and nautical themes, along with a jacuzzi. Dave and Martha enjoyed many hours in this room with family and friends. Dave and Martha were very neighborly. Martha was either working in the yard or sitting on the front porch and waved to all who drove by. She also made sure the kids walking home from school, the postman, and the garbage men had a cool drink on hot days. They actively worked in the yard, continuously adding to their landscape. Besides Dave’s fight with a rare lung disease in 1992, they both were blessed with very good health for most of their life. They lived a very full and rewarding life together until the very last breath they took. They were the best parents, grandparents, great grandparents, friends, and neighbors that anyone could ask for. A Funeral Mass will be celebrated on Saturday, July 2, 2022 at 11:00 a.m., at St. Mary’s Catholic Church, 1136 Seminole Drive, Rockledge, FL 32955. In lieu of flowers, memorial donations may be made to St. Mary’s Catholic School, 1136 Seminole Drive, Rockledge, FL 32955.